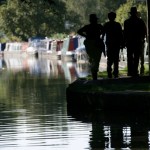 From the station car park walk onto Albion Road but immediately turn sharp right down Chapel Street. At the end you will see on the right a footbridge which takes the path (NM100) over the railway line. Follow this up to the A6 / Buxton Road and cross with care into Redmoor Lane (NM102) and continue on up.

Follow the route as it continues (34) all the way to Redmoor Farm at which point you should turn right along (33) to Buxton Old Road. Cross to (60) and follow this path over two stiles. After the second, contour to the field corner, then without crossing the third stile, turn right down the wall (32) and through a cottage garden back to Buxton Old Road. Cross (39) and follow it down Ward Lane.

Turn right down Ward Lane until it joins Greenshall Lane and continue down this route to its junction with the busy A6 / Buxton Road .Cross with care into Lower Greenshall Lane, walk under the railway bridge and on to the canal at Bridge 27. Turn right on to the Peak Forest Canal towpath (66) and head towards Newtown/New Mills leaving the canal shortly after Bridge 28. Go down Victoria Street to join Albion Road. Turn left and go uphill back to the station car park.

A public meeting was held at the Ram’s Head, Disley in 1793 to promote the building of the Peak Forest Canal. The canal was built on two levels: the upper level, from Marple through Disley to Whaley Bridge and Buxworth, was completed in 1796 and the lower level of thecanal, from Marple to Ashton under Lyne, was completed by 1799.