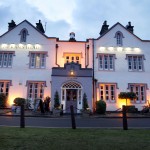 The Ram’s Head in the centre of the village is said to have been established in the mid 17th century as a coaching inn. The present building dates from 1840-1 when it was an important inn on the route between Manchester and Buxton. Some of the extensive stabling is still to be seen at the side of the car-park. In front of the building, there is a mounting block to help riders get into the saddle or even into or out of the coach. 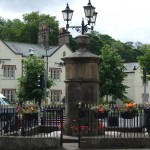 The Fountain, standing in the centre of Fountain Square, was presented to the village by the Orford family in 1834. Water was collected from the hillside near the parish church and piped into the fountain, where it was stored in a lead tank at the top. The three arm bracket light fitting was added in 1999, replacing an earlier light, as a permanent memorial to the Millennium. Just outside the railings, surrounding the fountain is a late 19th century milestone giving the distances to Stockport and Manchester.  In the centre of the village there are two buildings from the mid 19th century, No.5 Market Street, which dates from 1824 and across the road No.6, which dates from 1842. 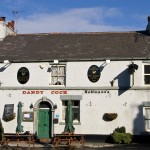 In the centre of the village there are two buildings from the mid 19th century, No.5 Market Street, which dates from 1824 and across the road No.6, which dates from 1842.Further along, in the centre of the village, is the Dandy Cock which is one of several public houses that existed in the 19th century. Originally its main entrance faced Hollinwood Road, but the building was turned around when the present main road was constructed in the early part of the 19th century.In Higher Disley, Disley Hall, on Corks Lane, is believed to be on the site of the original settlement in the area. The building itself has been altered with the passage of time, but it still retains a sturdiness that is characteristic of such former farming buildings.Another reminder of the agricultural origins of the village can be seen at Stanley Hall Farm Barn on the golf course. The barn is probably late mediaeval and still retains its cruck framed construction. 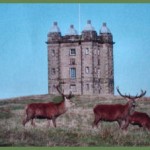 Disley is also home to one of the National Trust’s most popular and prestigious properties, Lyme Park. The park’s 1400 acres contain large herds of red and fallow deer with magnificent views across the Cheshire Plain. At St Mary’s Church there is the grave of Joseph Watson (born 1648), who lived to be 104 and was park keeper at Lyme for 64 years. Watson drove a brace of stags from Lyme to Windsor as a present for Queen Anne to win a 500 guinea wager for his master. 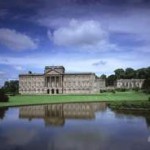 Lyme Hall was originally a remote hunting lodge. In Tudor times a house was built there and this was turned into an Italianate palace by the Venetian architect Leoni in the early 18th Century. It stands in a fine park with commanding views of the Cheshire Plains amongst ornate gardens. The house was once a home of the Legh family – later Lords Newton – who also had large estates in mid-Lancashire. The house is finely furnished and particularly notable for its Mortlake tapestries, wood carvings by Grinling Gibbons and a collection of English clocks. It offers a memorable glimpse of a genteel and extravagant age and has now become even better known since its use as ‘Pemberley’ in the BBC production of the Jane Austen novel Pride and Prejudice. 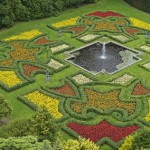 Lyme Hall is set in impressive gardens. The Dutch Garden was laid out in 1860 as an Italian garden with a variety of schemes using summer bedding plants. Four statues represent the elements of Earth, Fire, Air and Water in the form of cherubs. It is probably called the Dutch Garden after its earlier form when it had a cascade modeled upon that at Chatsworth and a canal pond with fountain.The Orangery contains some of the plants from the time of the first Lord Newton and his intitials can be seen on the floor. The fountain and much of the planting is modern but a 90 year old fig grows on the back wall and another wall has two Camellias which are thought to be about 175 years old and which are both of rare and so far unidentified species. 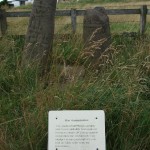 The Bow Stones are two up-right stones on the highest part of the moorland above Lyme Park. The origin of these two stones is unknown, but it has been suggested that they might have had some religious significance.
In Lyme Hall itself, there are two Anglo-Saxon Crosses which were found near the parish church. In the churchyard there is a stone block in which there are two holes which is believed to be the base of the crosses. From a view finder plaque (presented by the Society for the Protection of Rural England in 1975) on the nearby Gritstone Trail near the Bow Stones, it is possible to see seven counties (Cheshire, Derbyshire, Staffordshire,  Clwyd, Yorkshire, Shropshire and Lancashire). 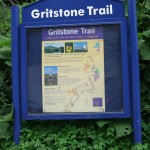 Disley is also the starting point of the Gritstone Trail. With its outstanding countryside, wonderful views and natural riches, the 35 mile/56 kilometre Gritstone Trail is both a challenge and a delight. The trail stretches from Disley  to Kidsgrove in the south.  In between walkers can enjoy outstanding views, industrial heritage, historic monuments, fascinating follies and abundant wildlife.