This walk can be started from the informal parking area beside Mudhurst Lane at SJ983833 or be completed as an extension of Walk 2. 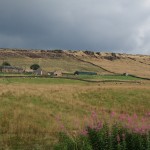 Walk a few metres south along Mudhurst Lane and turn right down a hedged track (19) following this pleasant route down to the bridge over the infant Bollinhurst Brook before climbing towards Lyme Park. Before you reach the East Lodge entrance to the Park, turn off to the left over a stile and onto (LH29), which is signed as a Gritstone Trail alternative route.

Follow this path back over the brook into Disley Parish and turn right uphill towards Cock Knoll along (51). On reaching Mudhurst Lane, cross into the entrance drive to the Moorside Grange Hotel (56) and follow it as it bends around to the hotel itself (54). Walk left through the car park following (54) into the rough pasture beyond.

Head for a fingerpost near some straggly trees. On reaching it, turn right and follow a rough path (58) up through the moor land to reach the right hand end of the line of gritstone crags which mark the crest of Black Hill.These rocky outcrops are formed from beds of course sandstone or ‘gritstone’ known as the Rough Rock. They mark the very top of the succession of grits and shales which together constitute the Millstone Grit group of rocks which give the Peak District and south Pennines so much of their character. You can trace the outcrop of the Rough Rocks as it falls away to the North and curves around leftwards through Lane Ends and on, parallel to Buxton Old Road, as far as Ring O’ Bells Lane.

As you walk along the crest you will have spectacular views over the Cheshire plain. All the rough ground in this section of the walk has been designated as ‘open access’ land. Turn sharp left and follow the path along the top of the crags, over a stile and on downwards in the same direction to a second stile.

On reaching (60) turn left to a low stone stile in the field corner. Bear left onto (32) passing a wall corner at 80 metres and then bear slightly right down to a stile, which leads quickly to another stile onto Mudhurst Lane. Follow the lane for a short distance back to the start.