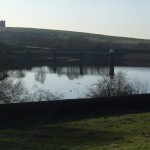 Cross the A6 at the traffic lights and turn right in the direction of Buxton.Just before the Dandy Cock, turn left down Hollinwood Road and under the railway bridge, bearing left immediately, up Hagg Bank Lane.Notice a swing bridge over the canal on your right after 400 metres. Some 50 metres further on you reach a footpath sign to Stanley Hall on your left (6). Go over the stile and up the field, keeping to the hedge and fence on your left. Climb over the stile near Widowhurst Farm, make for a gap in the hedge straight ahead then turn left along a track.

There are two railway lines running through Disley. The line between Stockport and Whaley Bridge was completed in 1857; later extended to Buxton and was completed in 1862. The second line was built to alleviate congestion in the Marple and Stockport areas by linking New Mills with Heaton Mersey. This opened in 1902 and included a 3 and a half kilometre long tunnel under Disley. Notice on your right, the ventilation shaft and the mound of spoil excavated from the Tunnel by the Midland Railway Company.

Arriving at a gate/stile, turn immediately right along the entrance drive to Disley Golf Club (3), but within 100 metres bear off to the left along (4) at the first sign. Follow the yellow arrows and line of white posts until you reach a sign near the edge of the disused Jackson’s Edge Quarry. Turn left along the path (5), past the underground water storage reservoir and down the driveway to a cottage. Cross Jackson’s Edge Road with care, as traffic can approach fast around the blind bend, and on past Jackson’s Edge Cottage (13) until you reachthe gateway of Homestead Farm.

Bear right over the stile and down through the woods (12), keeping the fence to your left. Go over another stile and down a field to the busy A6 road. Cross over, with care, and enter Lyme Park by its main entrance (if the gates to Lyme Park are closed then see note below). You soon cross a bridge over the Manchester-Buxton railway line and pass a lake on the left. Turn off left and leave the Park by Red Lane Lodge. Turn immediately right down the lane signed to Moorside (23).

At the fork take the left-hand track and at the top cross a stile towards Cockhead Farm. Just after passing Cockhead Farm on your right, turn left along the tarmac lane (22) and follow it for 500 metres until it bends sharply to the right. Leave it at this point, bearing half right, diagonally across a field to a stile. Climb over and turn left on (28) past the church drive and the Old Vicarage to Red Lane. Turn right downhill.

At the bend go straight on through the wooden gate down the steps to the Station Approach. A right turn brings you back to the Ram’s Head.
Note: The section of the walk through Lyme Park is not a public right of way – if the gates to Lyme Park are closed (after 8.30pm insummer and at dusk in the winter) you will need to continue left fora 500 metres along the footway beside the A6 to a gap in the fenceon the right and follow the signed path (20) down over the railway and up to an unsurfaced track (Red Lane). Turn right to its end to rejoin the main route near Red Lane Lodge.