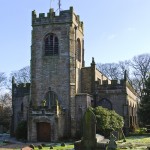 Disley’s Parish Church stands on a hill overlooking the village centre. The original chantry chapel was built by Sir Piers Legh between 1510 and 1524 and was enlarged during the 19th century to meet the requirements of a growing population.

Although enlarged, the church still retains some of the original 16th century building including the tower. The nave and chancel have a magnificently decorated ceiling whilst the windows on the east side are fine examples of medieval glass. The stained glass was purchased by the Legh family at an auction at Sotheby’s in 1926 and was originally from Steinfield Abbey in Bavaria. From the tower, the peel of six bells is rung regularly by the Disley bell ringers.

St. Mary’s (see the Notice Board by the Rams Head for details of special services)
8:00am BCP Holy Communion – as advertised
9:30am ‘Sunday at 9.30’ – a short (35 mins.) contemporary service for young families with ‘story-telling’ and TNS group for older children.
11:00am Morning Worship – generally Holy Communion
6:30pm  – occasional as advertised
St John’s Furness Vale
9:30am Morning Worship

Roman Catholic mass is celebrated every Sunday (at Disley Methodist Church) in Disley at 9.30am. For details of the service please ring 01663 732614 for further information. 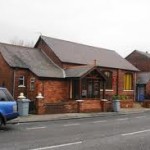 Wycliffe Hall was opened in 1891 and became the meeting place for a group of Christians who had previously met in a cottage on the Crescent. In the past, the building has served as a base for sports clubs, amateur dramatics and for meetings of the Disley Rural District Council in its early years.
The main Sunday service, which is appropriate for all ages, is at 10.30am. During the week, the hall is used for various activities including clubs for children and Bible study for adults. For further information contact Revd. James 01663 362000 or email james@disleypc.plus.com 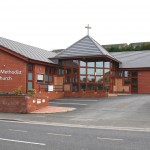 From 1805 Methodists worshipped in people’s homes before moving into the Lodge Chapel on Red House Lane. From 1895 this became inadequate and a new church was built on Buxton Road, opening in 1906. This was demolished in 2008 and a new modern church and community hall opened in 2009, to serve the whole village.
Morning Service 11:00am every Sunday. Holy Communion, 1st Wednesday in every month at 9:30am 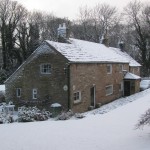 The Quaker Meeting House, Ring ‘o’ Bells, which still retains some of the original wattle and daub walls was originally a public house which was erected in the 17th or early 18th centuries, it became a coffee tavern in 1850 after losing its licence to sell alcohol.
It was used for early meetings of Disley Rural District Council. During the mid-20th century, the building was acquired by the Society of Friends and converted into a Meeting House and has since been extensively restored. Meetings are held on Sunday’s beginning at 10.15am. The building is also used for WEA classes and by the Disley Arts Society on a Monday morning.